Our mission is to create a harmonious community where each individual is a valued member who may ~ Grow in Love ~ enriched by the teaching and doctrines of the Catholic Church. 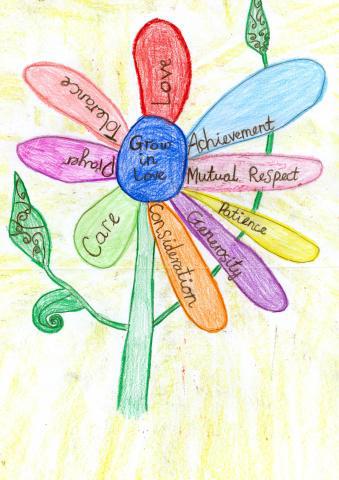 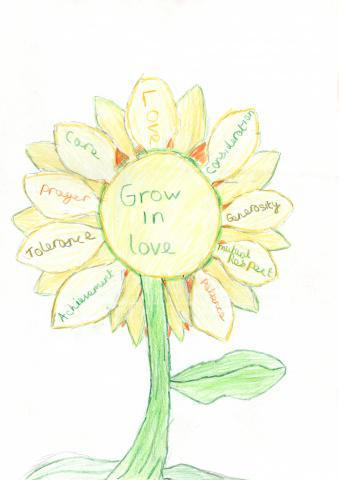 In August 1927 the present buildings in St Mark’s Road were first used as a primary school known as St Mark’s School.  Mr J Wood joined as Headmaster and was succeeded by Mr C Walker in 1930. In 1929 it was converted into a Church of England secondary school but it was only officially opened as a school on the 17th October 1937. The top class in Chantry House were sent to St Mark’s School.

In 1939, when World War II broke out, the school became a first-aid post and ambulance station, which meant that all the pupils had to be evacuated to Wales. In 1944 a V2 rocket that fell in Fairfax Road damaged Chantry House School but it re-opened in December 1945. Around this time the ambulance station was moved to a different part of Teddington and the first-aid post moved to a smaller part of the building. After the war, tribute was paid to former pupils of St Mark’s and Chantry House as well as the teachers. Mr Walker stayed on as head until December 1945.

During the War, and for a time afterwards, the playing field at the back of the school was used as a vegetable patch and the stand-alone building was a science laboratory. It was not until 1967 that the air raid shelters were removed.

St Mark’s Secondary School in St Mark’s Road moved to the new Teddington School in Broom Road on the 6th April 1963. Up until then the school had taught children up to the age of 15. Westminster Diocese bought the old St Mark’s school and Chantry House – (Sacred Heart School). They moved the school from Chantry House to the former St Mark’s school and continued Sacred Heart school there as a primary school. Sister Teresa was the Headmistress at the time. Sister Teresa stayed as head until Sister Dolores took over in 1973.

Memories of the School

When my eldest sister Shelagh went to the school in 1937, closely followed by my other sister, Maeve, it was situated in the building in Fairfax Road. Sister Joseph was the Headmistress. There were four classes, called Standards 1, 2, 3 and 4. Sister Edith was the infant teacher who taught us to count on coloured beads. She was a tiny woman but no one dared step over the mark with her! The cane hung in every classroom and “Hold out your hand!” was a familiar cry. If you didn’t hold out your hand, you got it twice. On cold days the children would sit on the large hot water pipes that heated the building – until they were spotted by Sister Edith, that is!

My brother Danny went in 1942, and I went to the school for the first time in January 1943, taking the tram from Broad Street, Teddington. The Headmistress then was Sister Seraphina who really did have the face of an angel. Our beloved Sister Teresa, who was Head till the advent of Sister Dolores, followed Sister Seraphim. I’ll never forget arriving on a wet cold day, unable to get my waterproof hood off because the string under my chin had got tangled. I didn’t think much of being separated from my sisters either. Tears and a runny nose were making a mess of my face. School numbers had grown and my classroom was on the stage – with the curtains pulled so that we didn’t disturb the other two classes.

The two main classrooms downstairs were divided by sliding doors and there was always great excitement when they were pushed back for any occasion. I seem to remember that it happened every day at lunchtime. The desks were put together and covered with oilcloths (oh, that distinctive smell!). The warming ovens were in the classroom and lunch arrived in large metal containers. I can still smell the cabbage! Who ever forgets school dinners?! My mother was the dinner lady and it was always so good to see her.

Shelagh remembers clearly the war years at school and listening out for the air raid sirens. That meant that we would go to the air raid shelters near the toilets at the bottom of the playground. We thought that was a great adventure since at home, my mother, who brought us up on her own, would never go to one, preferring to squeeze under the kitchen table with the four of us. During those years we never got to school regularly, air raids quite often disrupting our schooling. In 1944 the school was evacuated to Wales but that’s another story! Another sharp memory of the early years in Fairfax Road was celebrating Empire Day on 24 May – that and the regular visits from the nit nurse. Oh the shame if she discovered nits in your hair! Impetigo was a common infection and then you had to come to school with gentian violet painted over the sore spots – not a pretty sight!

Playground games ran in seasons: conkers in the Autumn for instance. The cheats soaked their conkers in vinegar and baked them. Conker fights would go on all over the playground that sloped down the side of the school. Younger pupils would spend playtime rushing down the slope and back up again. There was once an epidemic of “kiss chase” and wearing crossed pins  (the crossed pin meant that a boy had declared his love for you!) but Sister Teresa soon put a stop to that! We played hopscotch and skipping games, marbles or whipping tops, “the farmer’s in his den”, “oranges and lemons”, “a-tisket, a-tasket” and many others. There was a school bully even then. Danny remembers being terrified of him but always doing what he demanded. Once they all played football in Bushy Park instead of going to woodwork – a caning offence! Danny, who was Head Boy, was quite mortified.

Shelagh and Maeve left school at fourteen and Danny was fifteen. I was able to take the Eleven Plus and passed thanks to Sister Teresa and the top class teacher, Miss Byrne. Another teacher I remember was Miss Marjoribanks (she always told us to pronounce it ‘Marshbanks’). When I was seven she tried to get me to understand that one hundred and two is written 102 and not 1002!

I want to pay a personal tribute to Sister Teresa. She was strict, that’s what I remember as a pupil. In Top Class I hated needlework and always had a book concealed under my work on my lap. By then there was no cane but Sister Teresa had a ruler with which to rap knuckles and I always got mine rapped during needlework lessons. It was years later that I realised how much she had helped our one-parent family and what a friend she had been to my mother during very difficult times. I know single parents have it hard now but believe me, we really had nothing then. Sister would produce a beret for me – girls had to have hats if we were taken out – or other articles of clothing that we couldn’t afford. I always remember when I went to St. Catherine’s in 1949 that it was Sister Teresa who gave me my hockey stick and tennis racquet. A wonderful woman.

The school in St. Mark’s Road then was St. Mark’s Church of England – Secondary Modern, I suppose, 11-15 years and my husband Ken attended it. Top class pupils from Sacred Heart went there for woodwork and domestic science lessons; the boys to woodwork and the girls to domestic science of course! There was no field for school sports; it was all vegetable garden, and the outhouse was the science lab. The girls used the front playground and the boys were in the back. Games lessons were at the Harlequin Ground.

The Sacred Heart School is special to this family since all my children went there and now my grandchildren keep up the tradition.

One family has been associated with Sacred Heart School for many years – Noel and Maria Holdstock. We have managed to obtain some old photos of Noel when he was a young lad, and his sister Brenda who now lives in Toronto, Canada. They were all former pupils of Sacred Heart School in the 1950s.

Click on pictures to enlarge. Remember they are old photos and are not as clear as modern photos.

Some of their memories are that the school uniform is the same now except the boys had to wear ‘caps’, which were close-fitting and had a small peak. Think how many of these would now end up on the roof! Sport then was mainly netball, rounders and running – no football, cricket or rugby!

Noel and Maria’s children all went to Sacred Heart, and Lisa Stenning is now a teaching assistant at the school, with her three boys currently pupils!

Update July 2013:
My brothers, Edward and Michael and I went there in the 1950s, and in the first photograph where Noel Holdstock is mentioned (I knew the family) my brother Eddie is the first boy on the left in the back row, and I am in the front row, 5th girl along.  The lady standing next to Noel is my mother.  This photograph is of our 1st Holy Communion held in 1957 (we were all 7-8 years old). I do remember  Noel and his brother Brian, sisters Brenda and Cecelia (she had beautiful auburn hair). I have lots of memories of the school: Sister Teresa was Headmistress; Sister Francis was my class teacher. I also remember Mrs Creedon, Mrs Green and Mr Bleak (a temp). Father Phillip Moore was the parish priest at the Sacred Heart Church.
It was nice to see the old faces in the photo,  it brought back lots of memories.

I went to school in about 1965 – 71.  My name is William Keast however when I first joined the school, my surname was Harvey. I was in the same class as Charlotte Green, Madeline Fitzgibbon, Graham Harmes, Harry Fortune and apparently, though I do not remember him, Julian Clarey.  I remember being in Mrs Dobson’s class; we used to get our early morning 1/3 pint of milk!

I enjoyed school and recall there was a sandpit in one of the classrooms. There was a girl called Collette Wilson who people said was the daughter of the footballer Bob Wilson though I don’t know whether it was true.

The school was fun to me. I remember the tall climbing frame in the main hall, and doing French in the library with Sister Teresa. I also remember Giles Cunningham was good at maths. There was also a boy on crutches called John – I don’t remember his surname.

Rory Campbell (1966-69) remembers Sister Teresa who made us eat everything at school dinners. Father Moore gave Religious Instruction once a week; Mrs Dobson had a cream-coloured Austin 1100 and many amusing anecdotes! School trips were in a retired London Transport double-decker bus!

Unfortunately not the ones with chocolate chips.

Some cookies are necessary in order to make this website function correctly. These are set by default and whilst you can block or delete them by changing your browser settings, some functionality such as being able to log in to the website will not work if you do this. The necessary cookies set on this website are as follows:

Cookies that are not necessary to make the website work, but which enable additional functionality, can also be set. By default these cookies are disabled, but you can choose to enable them below: